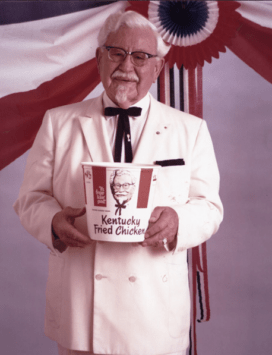 Harland Sanders created Kentucky Fried Chicken, the “finger lickin’ good” meal which became a fast-food sensation in the 1960s and a global food franchise in the 21st century.

Harland Sanders was already 40 years old when he began cooking chicken for customers at his service station in Corbin, Kentucky. According to his corporate biography, “Over the next nine years, he perfected his secret blend of 11 herbs and spices and the basic cooking technique that is still used today.” Colonel Sanders became well-known in his home state, but it took another 20 years before he began franchising Kentucky Fried Chicken restaurants around the country.

By 1964, when he sold his stake in the company, the Colonel’s chicken was being sold in the company’s popular paper buckets at over 600 outlets nationwide. Colonel Sanders continued to appear as the company’s spokesman for more than a decade: with his white suit, string tie and cane, he had the look of a courtly Southern gentleman. His autobiography, Life As I Have Known It Has Been Finger Lickin’ Good, was published in 1974.

Harland Sanders’ title of ‘Colonel’ was an honorary one; he was made a member of the Honorable Order of Kentucky Colonels in 1935 by Kentucky Governor Ruby Laffoon… “It’s finger lickin’ good” was the KFC advertising tag line for many years… In 1991, the company changed its name from Kentucky Fried Chicken to KFC, apparently in an effort to disassociate itself from the term “fried”… There is no truth to the rumor that Colonel Sanders’ will specified that 10% of KFC’s profits be given to the Ku Klux Klan. He had no connection to the organization… The KFC website says the Colonel’s secret recipe is kept locked in a safe in Louisville, Kentucky… KFC “rebooted” the Colonel in a series of funny ads in 2015, in which Colonel Sanders was played by comedians Darrell Hammond, Norm McDonald, Jim Gaffigan and (for extra-crispy chicken) by super-tan actor George Hamilton.

Something in Common with Harland Sanders