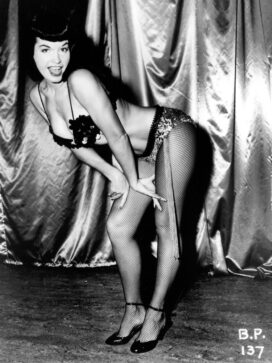 Bettie Page was a pin-up model of the 1950s who became an iconic favorite of retro-loving pop culture fans during the 1980s and ’90s.

Page began posing for photos in the 1940s as a way to make ends meet while working on an acting career. Her shapely figure, easy smile and trademark hairstyle — long black hair with bangs — made her a fan favorite. Photos done by Irving Klaw featured Bettie Page nude and semi-nude in fetishistic poses and exotic settings, including “jungle photos” of Page posing with cheetahs and other wild animals.

Until 1957, Page was a popular model in the mail-order trade and men’s magazines such as Wink and Eyeful, and, more famously, Hugh Hefner‘s Playboy (she was Miss January of 1955).

After retiring from modeling, Page faded from the public eye, attending religious schools in the 1960s, then having a mental breakdown in the 1970s that led to 20 months in the Patton State Hospital in San Bernadino, California.

Bettie Page was rediscovered in the 1980s, and through the lens of post-modern irony became a subversive symbol of 1950s kitsch. By the 2000s her ’50s image could be found in graphic design, the comics and a variety of merchandise, placing her in the role of a Marilyn Monroe for the alternative set.

Bettie Page’s name was spelled Betty at birth, but she switched the spelling to Bettie as a young girl, according to Richard Foster’s 2005 book The Real Bettie Page … Bettie Page was married four times to three different men; all four marriages ended in divorce, and she had no children… Bettie Page had an undergraduate degree from Peabody College in Nashville, Tennessee.

Something in Common with Bettie Page