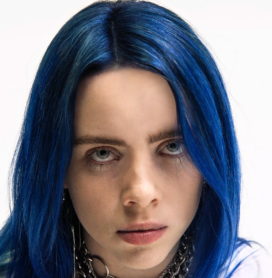 Pop Singer Billie Eilish took the music charts by storm in 2019, breaking through after three steady years of building a fan base on social media and perfecting her brand of cool-to-be-sad teen pop.

In 2020 she was among the stars of the Grammys. She won awards as best new artist and as the creator of Where Do We All Go When We Sleep? (album of the year and record of the year), and her hit “Bad Guy” was named song of the year.

From a family in show business — both parents are actors — Eilish and her older brother (Finneas O’Connell) put together the song “Ocean Eyes” in 2016, and it became a minor hit online. Soon enough, she had a PR team and a record label.

2017 and 2018 were her first steps into the mainstream, with her song “Bored” making it into the Netflix series 13 Reasons Why, and her singles “You Should See Me In A Crown” and “Then the Party’s Over” making it onto the charts.

Eilish made headlines in 2019 when “Bad Guy” hit number one on the charts, mostly because it knocked of Lil Nas X’s “Old Town Road,” after that song had broken chart records.

Eilish, the first pop star born after 2000 to have a number one hit, is known for connecting with young listeners with troubled minds, and for using “dark” references in her lyrics (killers, drugs, violence, depression, etc.).

Eilish and Finneas took home an Oscar in 2022 for their original song, “No Time to Die” from the James Bond film, No Time to Die (2021, starring Daniel Craig).

Something in Common with Billie Eilish