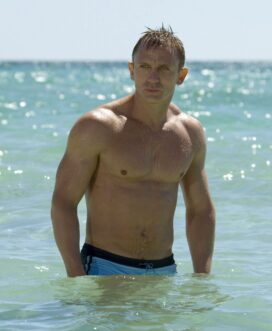 Daniel Craig’s icy blue eyes and loutish good looks are reminiscent of Richard Burton, and he is known for a similar intensity on the screen. His popularity as a leading man spread beyond his native England with the modest success of the the 2004 film Layer Cake (also with Sienna Miller).

Prior to that he was known to TV audiences as the star of the BBC miniseries Our Friends in the North (1996), and to movie audiences as Paul Newman‘s son in the 2002 film Road to Perdition (with Tom Hanks and Jude Law), and as poet Ted Hughes in Sylvia (2003, starring Gwyneth Paltrow as author Sylvia Plath).

In 2011 Daniel Craig co-starred with Rachel Weisz in the thriller Dream House,  and the two married in real life in June 2011.

Something in Common with Daniel Craig