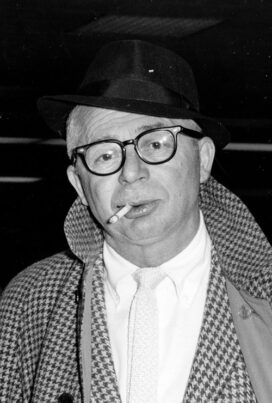 Billy Wilder made some of Hollywood’s most memorable and successful films, including Sunset Boulevard (1950), Some Like It Hot (1960) and The Apartment (1962). Billy Wilder was a journalist in Vienna and Berlin in the 1920s before getting work as a screenwriter in German films. With Adolf Hitler‘s rise to power, Wilder (who was Jewish) left for Paris in 1933. He made his way to Hollywood the next year and worked on scripts, especially sophisticated comedies and romances, including Ninotchka (1939, starring Greta Garbo). By 1942, Billy Wilder was directing films he had written and produced with his partner, Charles Brackett (1892-1969). Together they made The Lost Weekend (1945), The Bishop’s Wife (1947) and Sunset Boulevard (1950, starring William Holden). Wilder then collaborated with I.A.L. “Iz” Diamond (1920-88) on a string of successful comedies, including The Seven Year Itch (1955, with Marilyn Monroe), The Apartment (1960, with Jack Lemmon), Some Like It Hot (1959, with Monroe, Lemmon and Tony Curtis) and The Fortune Cookie (1966, with Lemmon and Walter Matthau). Known for sparkling dialogue and a cynical wit, Billy Wilder has been hailed as one of Hollywood’s most original filmmakers. He won half a dozen Oscars as a writer and director, and was awarded the Irving G. Thalberg Memorial Award for in 1988 for his body of work. His other films include Double Indemnity (1944, starring Barbara Stanwyck), Stalag 17 (1953) and Sabrina (1954, starring Audrey Hepburn).

Billy Wilder made seven films with Jack Lemmon… Billy Wilder became a naturalized U.S. citizen in 1934… During World War II he served as a colonel in the U.S. Army’s Psychological Warfare Division.

Something in Common with Billy Wilder