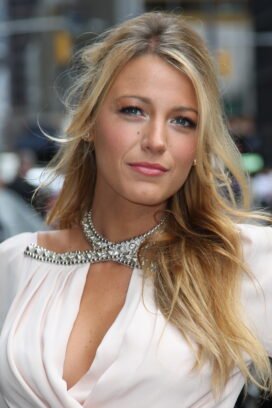 Blake Lively became a TV star thanks to her role as Serena van der Woodsen in the cable series Gossip Girl. Born into a family of actors, Blake Lively got her start while still in high school, when she landed a role in the movie The Sisterhood of the Traveling Pants (2005, with America Ferrera). A willowy dark blonde with a very clear complexion, Lively got various movie acting jobs before becoming one of Gossip Girl‘s debauched socialites in 2007, with a leading role as the friend and sometime rival to Leighton Meester‘s character, Blair Waldorf.  The show was a huge hit and in 2012 was renewed for a sixth (and final) season in 2012-13. Blake Lively’s film roles include Accepted (2006), Simon Says (2006), The Private Lives of Pippa Lee (2009, starring Keanu Reeves) and the Oliver Stone thriller Savages (2012). Blake Lively co-starred with Ryan Reynolds in the 2011 superhero flick The Green Lantern, and she and Reynolds were married in real life on September 9, 2012.

Blake Lively herself has been the subject of gossip in the tabloids, thanks in part to her romantic relationships with co-star Penn Badgley (Dan Humphrey in Gossip Girl) and Leonardi DiCaprio before her 2012 marriage to Ryan Reynolds.

Something in Common with Blake Lively