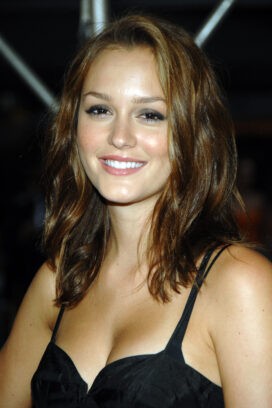 Leighton Meester stars as Blair Waldorf, the haughty schemer and frenemy on the TV show Gossip Girl (co-starring Blake Lively). Gossip Girl, which debuted on cable television in 2007, was based on the the popular book series about privileged, backstabbing, love-hungry prep school teens on the Upper East Side of Manhattan. Meester was already a TV veteran at age 21: she was 13 when she guest-starred on Law & Order (her first TV role). She followed that with appearances on 24, House, and many other TV shows. She raised her profile with a brief recurring role on Entourage in 2004 as Justine Chapin, a teenybopper singer in the Britney Spears mode. Meester was also a veteran model, having signed with the Wilhelmina agency in New York at age 11. Her feature films include the horror flick Hangman’s Curse (2003), the off-kilter drama Flourish (2006), and the black comedy Drive-Thru (2007).

Something in Common with Leighton Meester