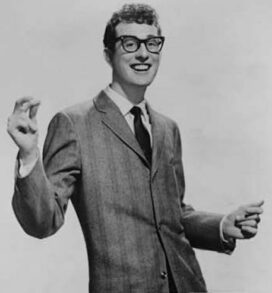 Buddy Holly was an early star of rock music whose most famous songs are “That’ll Be The Day” and “Peggy Sue.” Buddy Holly jumped into rock ‘n’ roll from a background in country and western music. He played the guitar and sang, and he had a keen interest in recording studio production techniques; he is credited with being the first to use overdubbing and double-tracking. (Buddy Holly’s backing band was known as the Crickets, which later inspired Paul McCartney and John Lennon to name their band the Beatles.) Buddy Holly was still only 22 years old when he was killed in the crash of a small plane in 1959, shortly after performing a concert in Clear Lake, Iowa. Killed in the same crash were fellow rockers Ritchie Valens and J.P. “The Big Bopper” Richardson.

Something in Common with Buddy Holly