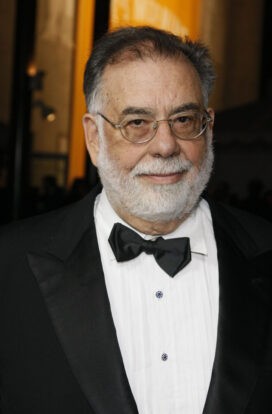 Francis Ford Coppola, like his contemporaries Martin Scorsese, George Lucas and Steven Spielberg, studied films and filmmaking in college. Like them, he made his name as a famous filmmaker in the 1970s, most notably with The Godfather and The Godfather: Part II.

Coppola’s first break came as a screenwriter; he won his first Oscar for writing Patton, the movie based on the life of George S. Patton, Jr.

By the late 1960s Coppola had formed his own production company, and in 1972 he released The Godfather, a box office smash and often hailed as one of the best movies of the 1970s (along with two of his other films, 1974’s The Conversation, and 1979’s Apocalypse Now).

In spite of what is now a spotty record, Coppola is considered one of the greats in the American movie business, more active as a producer these days than as a writer or director. He has also kept busy as a winemaker in California.

Coppola is the brother of actress Talia Shire, the uncle of actor Nicolas Cage, and the son of composer Carmine Coppola… Coppola’s daughter, Sofia Coppola, made her directorial and screenwriting debut in 1999 with The Virgin Suicides and directed the critically-acclaimed Lost in Translation (2003, starring Bill Murray).

Something in Common with Francis Ford Coppola