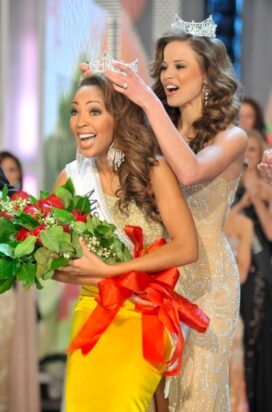 Caressa Cameron of Virginia was crowned Miss America 2010 at the annual Miss America Pageant in Las Vegas on 30 January 2010. Caressa Cameron attended Massaponax High School in Virginia, then spent two years at Germanna Community College before moving to Virginia Commonwealth University, where she became a broadcast communications major. She won the Miss Virgina Pageant in 2009, in part based on her platform issue, “Real Talk: AIDS in America.” It was her fourth time as a contestant in the pageant. She then won the Miss America Pageant (including a $50,000 scholarship) after singing the song “Listen,” made famous by Beyoncé in the movie Dreamgirls. Cameron was 22 years old when she became Miss America. Her ambition, according to the pageant, is “To work as an anchor for a television news station.”  She was succeeded in 2011 by Teresa Scanlan.

Something in Common with Caressa Cameron