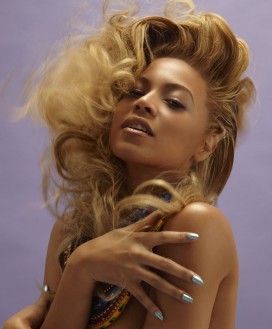 Beyoncé’s 2003 solo debut album, Dangerously in Love, won her five Grammy Awards and set the stage for her long run as one of pop music’s leading divas.

Her 2016 release, Lemonade, made history when all 12 songs made the hit charts at the same time.

Beyoncé was already was a pop music veteran when that first album was released: she had spent years with the all-female R&B group Destiny’s Child, which won its own Grammys with hits like “No No No” and “Say My Name.” Destiny’s Child was formed and managed by Beyoncé’s father, Mathew Knowles, and Beyoncé gradually became first among equals in the manner of Diana Ross and the Supremes.

Destiny’s Child went on hiatus in 2002 and Beyoncé went solo, appearing as sexy secret agent Foxxy Cleopatra in the Austin Powers sequel Goldmember and adding a hit single, “Work It Out,” to the movie’s soundtrack. In 2003 she had another hit with the single “Crazy in Love” (featuring rapper Jay-Z). Knowles also continued her screen career in 2003, co-starring with Cuba Gooding, Jr. in The Fighting Temptations.

Destiny’s Child reunited in 2004 to record the album Destiny Fulfilled, but then formally split up amid much fanfare at the end of 2005. Beyoncé in 2006 had a number one hit with “Irreplaceable” and appeared in the movie Dreamgirls (co-starring Eddie Murphy), then spent most of 2007 picking up awards and touring the world.

Beyoncé married Jay-Z in April of 2008, and in November of that year she released a new album, I Am… Sasha Fierce. Beyoncé won six Grammy awards for the album, including song of the year, best R&B song, and best female R&B vocal performance for “Single Ladies (Put a Ring On It).”

Among her other accomplishments, Beyoncé sang at halftime for Super Bowl XLVII in 2013 and again at Super Bowl 50 in 2016. In April of 2016 she released another highly-anticipated album, Lemonade, along with an hour long film on cable television that dominated music video awards later.

In 2019 she provided the voice of Nala for Disney’s live-action version of The Lion King.

Beyoncé and Jay-Z have a daughter, Blue Ivy Carter, born January 7, 2012, and twins born in June of 2017: son Sir Carter and daughter Rumi… Originally billed as Beyoncé Knowles, she now prefers to be known by the single name Beyoncé, in the manner of Prince and Sting… She was named ASCAP’s Songwriter of the Year in 2001, becoming the first African-American woman ever to win that award… Beyoncé and Stevie Wonder won a Grammy award in 2006 their duet “So Amazing”… When Beyoncé checked into the hospital to give birth to Blue Ivy, she used the pseudonym “Ingrid Carter”… She is sometimes called “Queen Bey,” with her fans known collectively as the BeyHive (pronounced “beehive”).

Something in Common with Beyoncé