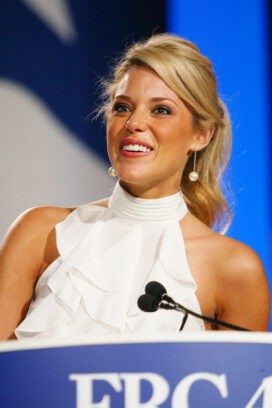 Caroline Michelle “Carrie” Prejean is the beauty pageant winner who became nationally famous in 2009 after she answered a question about gay marriage at the Miss USA pageant. Carrier Prejean grew up around San Diego and was Miss Greater San Diego Teen (2004) and Miss Greater San Diego (2007) before winning the Miss California U.S.A. pageant as Miss La Jolla in late 2008. As Miss California she competed in the 2009 Miss U.S.A. pageant on April 19, 2009. Asked by judge and gossip blogger Perez Hilton for her thoughts on gay marriage, Prejean said she was brought up to think marriage should be between a man and a woman. She was named runner-up (second place) in the pageant, but her stand against gay marriage led to attacks from Perez and others whose vehemence was disproportionate to Prejean’s actual statements. This brought just-as-vehement support for Carrie Prejean from gay marriage opponents and conservative Christian political groups, who praised her courage for speaking honestly. It was widely believed her remarks kept her from winning the Miss USA title, and she went on the stump, explaining that she’d chosen to be “biblically correct” rather than “politically correct.” She earned praise from heavyweights like Rush Limbaugh and Sarah Palin, and she was invited to speak at political and religious events as a hero for free speech. Her quick rise as a darling of conservatives was followed by a cascade of scandalous stories in the blogs and tabloids. Her status as a principled moralist was soon tainted by reports of topless photos, unpaid loans for breast enhancement surgery– loans from pageant officials — and a sexy video she had made for a boyfriend when she was 17. Carrie Prejean was stripped of her Miss California crown and she sued, claiming religious discrimination. The pageant sued back and the lawsuits were settled under a confidential agreement. Later that year Prejean published a book: Still Standing: The Untold Story of My Fight Against Gossip, Hate, and Political Attacks

Something in Common with Carrie Prejean