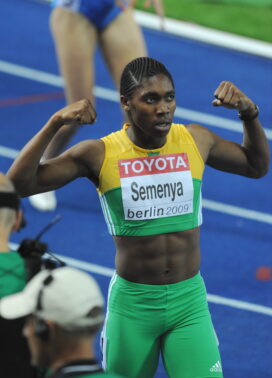 Caster Semenya is 32 years old
Born: January 7, 1991
Birthplace: Limpopo, South Africa
Best known as: The woman South African runner who was accused of being a man

Future Olympic champion Caster Semenya was a teenage runner from a small village in South Africa when she became the center of an international brouhaha about her gender in 2009.

That year, Caster Semenya sprinted out of obscurity to win the women’s 800 meters at the world track and field championships in Berlin. She did more than win: her time of 1:55:45 was more than two seconds better than the rest of the field. Her dominance, and her muscular and seemingly masculine physique, led the International Association of Athletics Federations (IAAF) to insist that she take both drug and gender tests.

This set off the great “gender row,” as the press called it, in which some people insisted that Semenya must be a biological male while others insisted that gender testing was wrong and insulting. After nearly a year of testing and deliberation, an IAAF panel declared in July of 2010 that Caster Semenya would keep her world championship and could compete as a woman.

The results of the IAAF gender test were not made public, but as The Guardian later noted, “it was widely reported that Semenya had both male and female sex organs and testosterone levels three times higher than typically found in a woman.” The term hyperandrogenic, used to describe someone with excessive production of androgens (including testosterone), is now often used to describe female athletes with higher-than-normal levels of testosterone.

In 2012, Caster Semenya made the South African women’s Olympic team, and won a silver medal with a second place finish in the 800 meters at the Summer Games in London. Caster Semenya again made the South African team in the 800 meters for the 2016 Summer Olympics in Rio de Janiero, and this time won the gold medal, beating the field with a time of 1:55:28.

In 2018, the IAAF issued new rules limiting competition for female runners with naturally high testosterone, at distances from 400 meters up to one mile. Semenya challenged the new rules, but in 2019 the Court of Arbitration for Sport (Cas) rejected her appeal, meaning that she would have to lower her testosterone levels for six months prior to competing in those events.

Caster Semenya is 5’10” tall (178 cm) and weighs 161 pounds (76 kg) according to her profile on the official site of the 2012 Olympics… Caster Semenya’s 1991 birth certificate from South Africa states that she is female… Semenya’s case is reminiscent of another Olympic runner, Stella “The Fella” Walsh… Many sources list her city of birth as Pietersburg or Polokwane; Pietersburg was a larger town near her village of Ga-Masehlong, and its name was later changed to Polokwane… Caster Semenya reportedly married her fellow athlete Violet Raseboya in 2015. Raseboya is a South African cross-country runner.

Something in Common with Caster Semenya