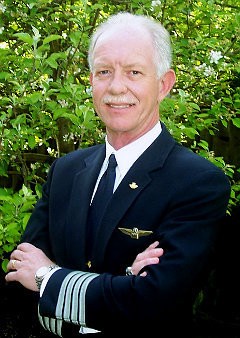 Chesley B. “Sully” Sullenberger III is the U.S. Airways pilot who was hailed as the “Hero of the Hudson” after he successfully landed an Airbus A320 in the Hudson River on 15 January 2009, saving the lives of all 155 people on board.

Flight 1549 had taken off from New York’s La Guardia Airport and reached an altitude of 3000 feet when both engines failed after the plane hit a flock of geese.

Sullenberger turned the plane and splashed to a hard landing on the Hudson, where all passengers and crew were rescued by nearby boats before the plane sank.

Sullenberger had been a U.S. Airways pilot since 1980, and flew for the U.S. Air Force from 1973-1980. He attended the U.S. Air Force Academy, and also has an M.S. in Industrial Psychology from Purdue and an M.A. in Public Administration from the University of Northern Colorado.

“Sully” published the memoir Highest Duty in 2009, and retired from U.S. Airways in 2010, a little more than a year after his Hudson heroics. Sullenberger is also the founder of Safety Reliability Methods, a consulting firm specializing in “complex, high-risk, technical systems.”

His co-pilot on flight 1549 was Jeffrey Skiles, 49, of Oregon, Wisconsin… Chesley Sullenberger’s nickname is “Sully”… His wife, Lorrie Sullenberger, is a fitness expert who runs the website “Fit and Fabulous… Outdoors.”

Something in Common with Chesley B. Sullenberger III