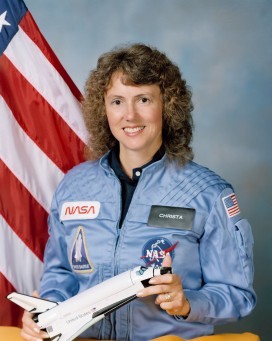 1986 report on her life from The New York Times

NASA's big page of detailed info and links on the mission

From an unofficial tribute site to Arlington Cemetery, photos of the memorial and the crew's story

Christa McAuliffe was a high school teacher from Concord, New Hampshire who died with six other astronauts in the 1986 explosion of the U.S. space shuttle Challenger.

Christa McAuliffe was chosen as the first participant in the Teacher in Space Program created by the National Aeronautics and Space Administration (NASA) in 1984. A native of Massachusetts, McAufliffe had been teaching for fifteen years when she applied for the program. She was selected in 1985 to be the first civilian in orbit; California teacher Barbara Morgan was selected as her back-up.

Challenger blasted off on 28 January 1986 and exploded about 73 seconds after launch, killing everyone aboard. After a detailed investigation by a blue-ribbon panel that included moonwalker Neil Armstrong and physicist Richard Feynman, the deadly explosion was blamed on faulty booster rocket O-rings.

Christa McAuliffe married Steven McAuliffe in 1970; they had a son, Scott, and a daughter, Caroline… Other astronauts aboard the Challenger: Francis R. “Dick” Scobee (mission commander), Michael J. Smith, Ronald E. McNair, Ellison S. Onizuka, Gregory Jarvis, and Judith Resnik… The Challenger deaths were the first-ever fatalities during an American space flight, but in 1967 three astronauts were killed while training on the launch pad for the first Apollo mission: Virgil “Gus” Grissom, Ed White and Roger Chaffee… Another shuttle, Columbia, disintegrated while returning to Earth on February 1, 2003, killing all seven aboard.

Something in Common with Christa McAuliffe