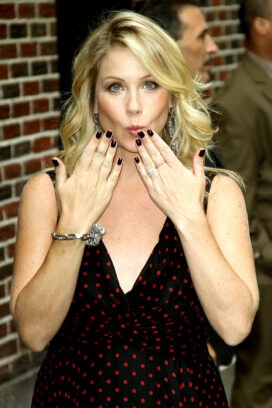 Christina Applegate played Kelly, the not-too-bright bombshell daughter of the dysfunctional Bundy family, on the sitcom Married… With Children. Applegate was a teenager when the persistently popular series began in 1987; she grew into the role and was a favorite with male viewers and Web surfers by the show’s end in 1997. Her film career has included roles primarily in comedies and feel-good films, including Tim Burton‘s Mars Attacks (1996, opposite Jack Black), The Sweetest Thing (2002, starring Cameron Diaz), and Anchorman: The Legend of Ron Burgundy (2004, with Applegate as a newscaster rival to Will Ferrell). She starred as a single mom in the TV series Jesse (1998-99) and played the title role in the sitcom Samantha Who? (2007-09), then was sidelined for a while after being diagnosed with breast cancer (she had a double masectomy). Applegate also starred on Broadway in a 2005 revival of the musical Sweet Charity, in the title role created by Gwen Verdon in the show’s original 1966 run.

Applegate was once married to actor Johnathon Schaech (2001-06)… She played movie star Grace Kelly as a youngster in the 1983 TV movie Grace Kelly; Cheryl Ladd played the adult version of Kelly… The Broadway run of Sweet Charity was almost cancelled after Applegate broke her foot during a Chicago try-out of the show; she returned in May and was nominated for a Tony Award as best actress in a musical.

Something in Common with Christina Applegate