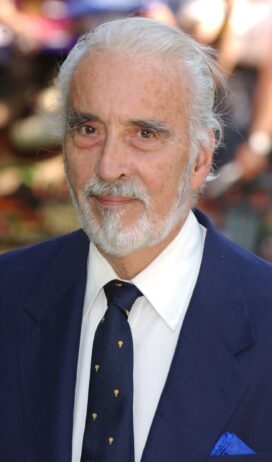 After a long and distinguished career as one of the biggest stars of horror and fantasy films, Christopher Lee gained fresh fame with movie audiences as Saruman the White in the Lord of the Rings trilogy of films, and as Darth Tyranus in the Star Wars epics Episode II: Attack of the Clones (2002) and Episode III: Revenge of the Sith (2005). Christopher Lee began making movies in 1947. Lean and brooding, with a face that carried a bit of a cruel streak, Lee for many years played mostly villains and monsters, thanks in part to a long association with the United Kingdom’s Hammer Films. His best-known role was the vampire Dracula, which he played in 10 films ranging from Dracula (1958) to Taste the Blood of Dracula (1970) to Dracula and Son (1976). But his remarkable filmography included more than 250 films, including The Mummy (1959); The Hands of Orlac (1961); The Gorgon (1964); The Face of Fu Manchu (1962); The Devil Rides Out (1968); The Wicker Man (1973); The Three Musketeers (1973, co-starring Faye Dunaway); The Man With The Golden Gun (1974, with Roger Moore as Bond and Lee playing the titular assassin, Scaramanga); Airport ’77 (1977, starring Jack Lemmon); and Sleepy Hollow (1999, with Johnny Depp). In 1977 he published his autobiography, Tall, Dark and Gruesome, and his career seemed to be on the wane. But in the 21st century he was introduced to a new generation of fans in the Star Wars and Lord of the Rings films. In the latter he played the villainous wizard Saruman in The Fellowship of the Ring (2001), The Two Towers (2002) and The Return of the King (2003). He reprised the role for the prequels The Hobbit: An Unexpected Journey (2012) and The Hobbit: The Battle of the Five Armies (2014). He was made a Commander of the British Empire in 2001 and then knighted in 2009.

Christopher Lee was 6’5″ tall according to most sources, although others list him as 6’4″… Christopher Lee made nearly two dozen movies with his friend and fellow horror star Peter Cushing.

Something in Common with Christopher Lee