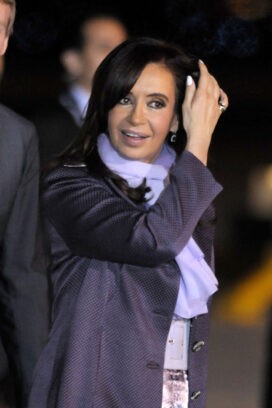 Cristina Fernández de Kirchner was elected president of Argentina in 2007. Her candidacy was boosted by the fact that her husband, Néstor Kirchner, was at the time Argentina’s sitting president. Cristina Fernández was born in the Buenos Aires province of Argentina, and met her husband at law school in La Plata in 1975. She embraced the political life and became a force in the center-left Justicialist (or Peronist) party. Her husband did the same; by 1995 Cristina Kirchner was a senator and her husband was governor of Santa Cruz province. After his election as president in 2003, they were often compared with Bill and Hillary Clinton. Christina was also called “The New Evita” after Eva Peron, the glamorous Argentine First Lady of the 1950s. Néstor Kirchner chose not to run for reelection in 2007, and his wife replaced him as the candidate of the Justicialist party. She won with 45% of the vote in general elections of October 2007, and took office in December of that year. Néstor Kirchner’s decision to step down in favor of his wife in 2007 was widely seen as a way to stretch family control of the presidency, since Argentine law would allow him to run again after being out of office for four years. However, Néstor Kirchner died of a heart attack on 28 October 2010, and Cristina Fernández de Kirchner was reelected in 2011 for another four-year term.

The Justicialist Party is called in Spanish the Partido Justicialista, or PJ. It is commonly called the Peronist party after its founder, President Juan Peron… Kirchner is not the first First Lady of Argentina to become president. Isabel Peron, the third wife of Juan Peron, served as president from 1974-76 after her husband’s death. He was the founder of the Peronist party that Kirchner represents; Eva Peron was his second wife.