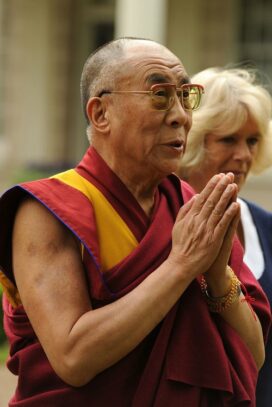 Born to a peasant family in northeastern Tibet, Lhama Dhondrub was only three years old when he was recognized as the 14th Dalai Lama in 1939. He has remained the Dalai Lama (the term is Mongolian for “Ocean of Wisdom”) into the 21st century.

In Tibetan Buddhism, the Dalai Lama is believed to be an incarnation of Avalokitesvara, the Buddha of Compassion; when the Dalai Lama dies, his soul is believed to pass into the body of an infant. Upon recognition, Lhama Dhondrub was renamed Jetsun Jamphel Ngawang Lobsang Yeshe Tenzin Gyatso, and is referred to as Yeshe Norbu, the Wishfulfilling Gem or Kundun.

Trained as a monk from childhood, the Dalai Lama was a teenager when he became the head of the Tibetan government in their fight against the occupying forces of the People’s Republic of China. Since 1959 the Dalai Lama has been the leader of the government in exile. His travels in the cause of peace and a free Tibet have made him an international celebrity, and in 1989 he was awarded the Nobel Peace Prize.

The Dalai Lama has never married and has no children. As a Buddhist monk, he has taken vows of celibacy.

Something in Common with Dalai Lama