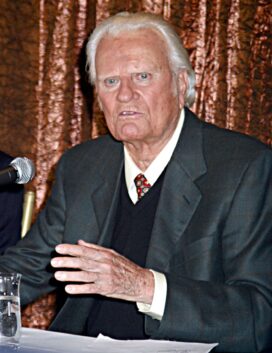 One of the best-known Christian evangelists of the 20th century, Billy Graham was a globetrotting preacher, multi-media power and counselor to multiple presidents.

Billy Graham made his “commitment to Christ” at age 16 through the ministry of a traveling evangelist, Mordecai Ham. Graham became a preacher himself, and gained world attention in 1949 with a tent revival in downtown Los Angeles that was scheduled for three weeks and lasted six. In the ensuing decades, “Billy Graham Crusades” consistently drew audiences of thousands to arenas and stadiums throughout the world.

Graham founded an association that continued those and other ministries, including an “Hour of Decision” radio program, televised crusades, a newspaper column, Decision magazine, and films. Graham was also a co-founder of Christianity Today magazine. He consulted and prayed with every U.S. president from Harry Truman to Barack Obama — a fact that solidified his popular status as the nation’s preacher but also opened him to criticism.

At the same time, Billy Graham’s ministry remained free of the financial and sexual scandals that marred the careers of prominent contemporaries such as Jim Bakker and Jimmy Swaggart. In the last decade of his life, Graham stepped out of the public eye; his elder son, Franklin Graham, took over as CEO of his father’s ministry.

Billy Graham died at home in North Carolina in 2018. The New York Times reported that he “had dealt with a number of illnesses in his last years, including prostate cancer, hydrocephalus (a buildup of fluid in the brain) and symptoms of Parkinson’s disease.”

Billy Graham was ordained as a Southern Baptist and pastored one congregation (First Baptist Church, Western Springs, Ill.), but the rest of his ministry was deliberately nondenominational… Billy Graham and Ruth McCue Bell met as students at Weaton (Ill.) College and were married in 1943, the year he graduated. They had five children: Virginia (born 1945), Anne (b. 1948), Ruth (b. 1950), William Franklin III (b. 1952), and Nelson (b. 1958). Ruth Graham died in 2007.

Something in Common with Billy Graham