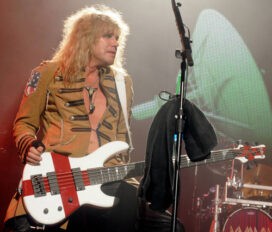 They're heavy into online action

The Def Leppard Satellite of Love

Professional bio and discography; all the basics

From their home country, a smashing fan site

The heavy metal band Def Leppard was formed in Sheffield, England in 1977; founding members included lead singer Joe Elliot (b. 1 August 1959), bassist Rick Savage (b. 2 December 1960) and guitarist Pete Willis. Drummer Rick Allen (b. 1 November 1963) and guitarist Steve Clark (b. 23 April 1960) joined the band shortly thereafter. Their debut album On Through the Night (1980) was a hit and Def Leppard joined groups like AC/DC and Ted Nugent among the heavy hitters of arena rock. Their 1983 album Pyromania (and its single “Rock of Ages”) made them early stars of MTV. They kept playing through the 1980s and 1990s, emerging as elder statesmen of rock as the 21st century began. Their other albums include Hysteria (1987, including the hit single “Love Bites”) and Euphoria (1999).

According to the band’s official bio, their name was originally spelled Deaf Leopard… The band’s early producer, Robert “Mutt” Lange, later produced (and married) country star Shania Twain… Drummer Rick Allen lost his left arm in a 1984 traffic accident, but learned to drum one-armed and continued on with the band… Willis was fired for drunkenness during the 1980s and replaced by guitarist Phil Collen… Guitarist Steve Clark died in 1991 after mixing painkillers with liquor; he was later replaced by Vivian Campbell… Their hit “Pour Some Sugar On Me” was covered in 2001 by singer Emm Gryner.

Something in Common with Def Leppard