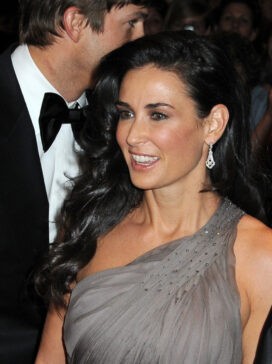 After two years on the soap opera General Hospital (1982-83), Demi Moore progressed to lightweight ingenue movie turns and then into more serious dramatic roles. Ghost (1990) made her a major star. A fitness buff with no fear of self-promotion, Moore posed nude for the cover of Vanity Fair magazine while eight months pregnant in 1991. Her $12 million payday for the 1996 movie Striptease made her, for a time, Hollywood’s highest-paid actress, but after starring in the big-budget drama G. I. Jane (1997, directed by Ridley Scott) she appeared in fewer and smaller films. In 2003 she returned to the screen as the villain in Charlie’s Angels: Full Throttle (starring Drew Barrymore, Cameron Diaz and Lucy Liu). Her other films include A Few Good Men (1992, with Tom Cruise and Jack Nicholson), Indecent Proposal (1993, with Robert Redford), The Scarlet Letter (1995, as Hester Prynne) and The Juror (1996, with Alec Baldwin).

Moore took her last name from her first husband, drummer Freddy Moore; they were married from 1980-84… She married actor Bruce Willis in 1987. The couple separated in 1998 and were officially divorced in 2000. They have three daughters: Rumer, Scout and Tallulah… She married actor Ashton Kutcher in September of 2005.

Something in Common with Demi Moore