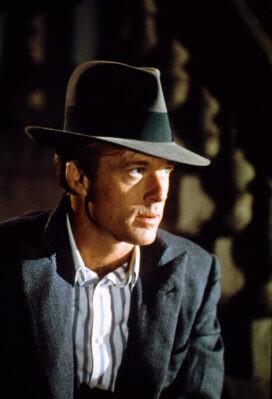 Official site of his non-profit (and the film festival)

Lengthy, meaty 2007 article from the The Times of London

Butch Cassidy and The Sundance Kid

Detailed retelling of the movie that made Redford a star

Now a Hollywood icon, Robert Redford had only done a handful of films when he was cast with Paul Newman in 1969’s Butch Cassidy and the Sundance Kid. (Newman was Butch and Redford was Sundance.) The huge success of the film made Redford a star, and during the 1970s he was one of Hollywood’s biggest leading men, co-starring with Barbra Streisand in The Way We Were (1973), with Faye Dunaway in Three Days of the Condor (1975) and with Dustin Hoffman in All The President’s Men (1976, directed by Alan Pakula).

Earnest and handsome, Robert Redford has been an advocate for the arts and has used his celebrity to further political causes — mostly concerned with preserving nature. In 1981 he founded the Sundance Institute, dedicated to enriching American cinema; the annual film festival became a major event and the American equivalent of the film festival at Cannes.

As an actor, Redford’s memorable roles include Jeremiah Johnson (1972),  The Sting (1973), The Natural (1984, with Glenn Close) and The Clearing (2004). In 2013 he earned raves for his performance in the one-man film All Is Lost by director J.C. Chandor. Redford is also a film producer and director whose credits include Ordinary People (1980, starring Mary Tyler Moore) and The Horse Whisperer (with Redford and Kristin Scott Thomas).

Robert Redford won an Oscar for directing Ordinary People… He was nominated for another Oscar for directing Quiz Show (1994)… Robert Redford has been married twice. He was first married to Lola Van Wagenen from 1958 until their divorce in 1985, and they had four children: Scott (born 1959, who died of Sudden Infant Death Syndrome the same year), Shauna (b. 1960), James (also known as Jamie, b. 1962) and Amy (b. 1970). Redford married German artist Sibylle Szaggars in 2009.

Something in Common with Robert Redford