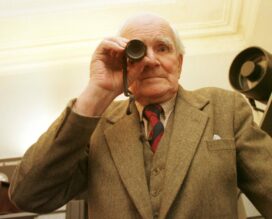 Desmond Llewelyn first played Q in From Russia With Love in 1963 (with actor Sean Connery as Bond). He then appeared in every Bond film through Tomorrow Never Dies (1999, with Pierce Brosnan as Bond), except for 1973’s Live and Let Die, which had no part for the character.

Llewelyn was typically on-screen only briefly, instructing Bond on the latest deadly gadgets and expressing exasperation at Bond’s raffish disregard for government property.  Despite his limited screen time, Llewelyn’s long run as Q made him a favorite with fans of the Bond film series. He played the role opposite five different Bonds: Connery, George Lazenby, Roger Moore, Timothy Dalton, and Brosnan.

Prior to his acting career, Desmond Llewelyn served in the Royal Welsh Fusiliers during World War II; he was captured and spent five years in a German prisoner of war camp. In 1999, shortly before his death in a car accident, he collaborated with author Sandy Hernu on an authorized biography titled Q: The Biography of Desmond Llewelyn.

The first Bond film, Dr. No, featured actor Peter Burton as Major Boothroyd, the forerunner of Q… Comic actor John Cleese succeeded Llewelyn as Q in the Bond film Die Another Day (2002, with Pierce Brosnan). Other actors to play the role include Ben Whishaw, Geoffrey Bayldon (in the first Casino Royale, 1967) and Alec McCowen (in Never Say Never Again, 1983).

Something in Common with Desmond Llewelyn