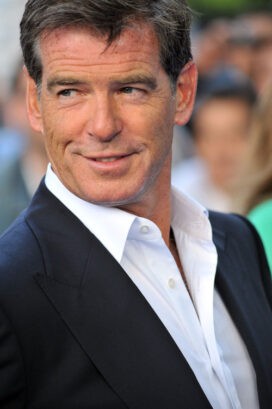 Pierce Brosnan was a hit as a mysteriously handsome private eye in the TV series Remington Steele (1982-87, with Stephanie Zimbalist). In 1994 Brosnan was chosen to replace Timothy Dalton as the superspy James Bond in the long-running series of Bond movies. His films as Bond include Goldeneye (1995), Tomorrow Never Dies (1997, with Michelle Yeoh), The World Is Not Enough (1999, with Denise Richards) and Die Another Day (2002, with Halle Berry). Brosnan’s other films include The Fourth Protocol (1987, with Michael Caine), Mrs. Doubtfire (1993, as the romantic rival of Robin Williams), the remake of the Steve McQueen classic The Thomas Crowne Affair (1999), Laws of Attraction (2004, with Julianne Moore), and the black comedy The Matador (2005, with Brosnan as a dishevelled hit man who befriends Greg Kinnear).

Something in Common with Pierce Brosnan