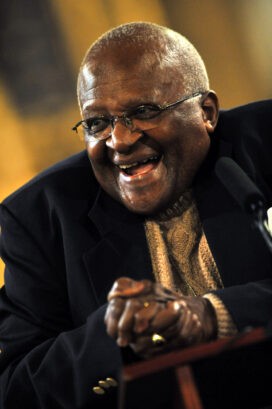 Raised in several communities in the Transvaal region, Desmond Tutu was educated at a Pretoria teachers’ college, a Johannesburg seminary and King’s College, London. He was ordained a priest in the Anglican Church in 1961, became Bishop of Lesotho in 1976, and by 1986 was his country’s highest Anglican official as Archbishop of Cape Town.

In the 1970s and 1980s, Tutu urged global economic pressure against South Africa and led a “defiance campaign” against a government ban on anti-apartheid demonstrations. He and other members of the clergy often intervened in confrontations between demonstrators and police or between mobs and informants.

In the 1990s, with apartheid finally defeated, he headed the Truth and Reconciliation Commission in Nelson Mandela‘s new government. Desmond Tutu retired as archbishop in 1996 but remained outspoken in domestic and world affairs until 2010, when he announced he was “slowing down” his public activity.

The name Tutu, in his family’s traditional IsiXhosa language, means “ash.” His middle name, Mpilo, means “hope.” During apartheid he downplayed his specific ethnicity in favor of wider black unity… Desmond Tutu married the former Nomalizo Leah Shenxane, who then went by Leah Tutu, in 1955. They remained married for 66 years until his death in 2021. They had a son, Trevor, born in 1956, and then three daughters: Thandeka Theresa (b. 1957); Naomi (b. 1960); and Mpho (meaning “gift,” b. 1963)… After his death in 2021, Reuters reported that Tutu “was diagnosed with prostate cancer in the late 1990s and in recent years was hospitalized on several occasions to treat infections associated with his cancer treatment.”

Something in Common with Desmond Tutu