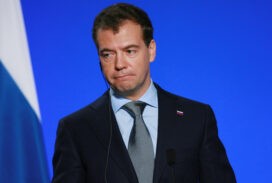 2008 report, with links to news stories about his swearing-in

Newsweek examines his relationship with Putin

A protegé of outgoing President Vladimir Putin, Dmitry Medvedev was himself elected president of Russia in 2008.

Medvedev is known as a sharp legal and business mind with an interest in economic reform. The son of university professors, he earned a law degree (1987) and then a doctorate (1990) at Leningrad State University.

He became an assistant professor of law at the same school, while also running his own consulting firms and working in local politics, where he met Vladimir Putin. Putin moved up to the Kremlin to work for President Boris Yeltsin in 1996, and Medvedev followed him there in 1999.

Putin stepped down as required by term limits in 2008; as Putin’s hand-picked successor, Medvedev won election easily and was sworn in on 7 May 2008.

He then made Putin his prime minister, leading to speculation that Putin would again run for president in 2012. That speculation proved exactly correct: in 2012, Medvedev stepped aside as Putin ran for and won election again as president. Putin immediately named Medvedev as the new prime minister; Medvedev was sworn in as prime minister again in 2018, after Putin won re-election.

In January of 2020, Prime Minister Medvedev announced the resignation of the entire Russian government, so that a new model could be formed. President Putin assented.

The BBC has noted that Dmitry Medvedv was “the country’s first leader in decades with no known links either to the former Soviet Communist party or secret services”… According to RussiaProfile.org, “Medvedev is shorter than his potential predecessor, Putin, at 5 feet, 4 inches. He swims nearly one mile, twice a day”… Dmitry Medvedev and his wife, Svetlana, have one child, Ilya (b. 1996)… The Russian constitution bars presidents from serving three consecutive terms, but it does not prevent former two-term presidents from running again later… Medvedev is reportedly a longtime fan of Led Zeppelin and other classic rock groups… Leningrad State University is now St. Petersburg State University; the city was renamed after the fall of the Soviet Union.