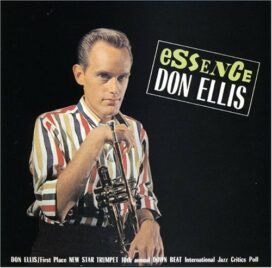 Don Ellis played trumpet in big bands and orchestras before leading his own bands and recording his own compositions in the 1960s and 1970s. Early on he became known for his experiments with odd time signatures (like 9/8 or 15/16) and unusual instrumentations, and his Eastern-influenced jazz gained popularity during the psychedelic 1960s. Don Ellis also invented a four-valve trumpet and developed a slide/valve trombone called a “superbone.” His albums included Essence (1962), Autumn (1968), Tears of Joy (1971), and Live at Montreaux (1977).  In later years Ellis had heart trouble, and he was only 44 when he died of a heart attack in 1978.

Don Ellis won a Grammy Award for his soundtrack to the 1971 film The French Connection.

Something in Common with Don Ellis