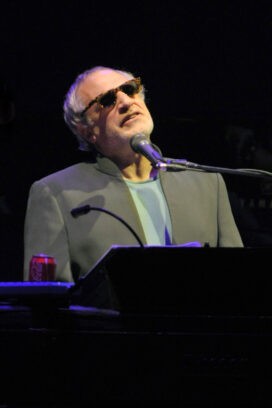 Keyboardist/vocalist Donald Fagen and guitarist Walter Becker are the principals of the long-running group Steely Dan. From 1972 to 1980 the group released a series of jazz-tinged pop albums which peaked with the mysterious Aja (1978) and ended with the slightly creepy Gaucho (1980). The band stopped recording but retained a steady cult of followers besotted with its clever tunes, quirky lyrics and rascally attitude. Fagen later released two solo albums, The Nightfly (1982) and Kamakiriad (1993), the decade-long gap enhancing his reputation as a cerebral studio perfectionist and reclusive avatar of High Pop. In the ’90s Steely Dan resurfaced, with Fagen and Becker touring extensively. Their 2000 release Two Against Nature, the first new Steely Dan album in 20 years, won three Grammy Awards including the award for Album of the Year. They were inducted into the Rock and Roll Hall of Fame in 2001. Their next album, Everything Must Go, was released in 2003. Fagen released another solo album, Morph the Cat, in 2006, followed by a boxed set of all three solo albums, The Nightfly Trilogy, in 2007.

Fagen and Becker attended Bard College along with actor Chevy Chase; the three briefly played together in a band known as Leather Canary… The band was introduced by Moby at their induction to the Rock and Roll Hall of Fame. Moby told MTV News, “I don’t know how or why I was chosen. I assumed they hated everybody.”

Something in Common with Donald Fagen