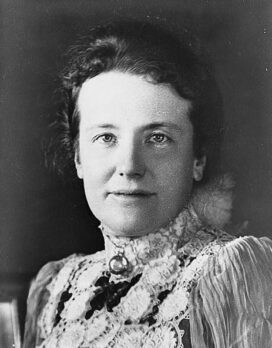 Edith Kermit Carow Roosevelt was First Lady of the United States during her husband Theodore Roosevelt‘s presidency, from 1901 until 1909. The two were childhood friends in New York, but did not marry until 1886, two years after Teddy’s first wife died. Edith had a busy life, raising six kids and keeping track of her husband’s many career shifts and adventures. Although it’s said she was a private person, she ably ran things at home was socially active while Teddy served in New York and Washington, traveled the globe or fought in wars. Becoming the nation’s first lady was an unexpected turn: her husband had reluctantly accepted the post of vice president for Republican President William McKinley‘s second term, and half a year into it McKinley was assassinated. Theodore Roosevelt was sworn in as president on September 14, 1901. Edith rose to the occasion as First Lady, overseeing the renovation of the White House and getting the congress to fund support staff, while also managing public relations and Washington’s social scene with high marks. Widowed in 1919, Edith settled at the Roosevelt home in New York (Sagamore Hill), but she continued to travel the world and take part in Republican politics.

Edith and Teddy had five children (four boys and one girl), and Edith raised step-daughter Alice, the only child of Teddy and his first wife, Alice Lee… Edith did not support Democrat Franklin D. Roosevelt‘s presidential campaigns — he was her nephew-in-law.

Something in Common with Edith Roosevelt