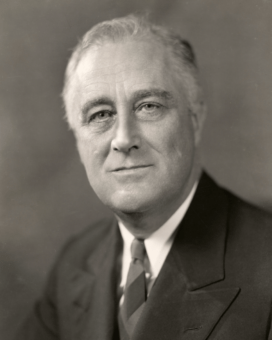 President Franklin D. Roosevelt managed to pull Americans out of the Great Depression and lead them to victory in World War II. He was known widely as FDR, and his support of an active federal government shaped American politics through the remainder of the 20th century.

Franklin Roosevelt was born into a wealthy New York family in 1882. He attended the private school Groton from 1896-1900), then went on to Harvard, where he earned a bachelors degree in History from Harvard in just three years, graduating in 1903. He then studied law at Columbia University; he passed the bar exam in 1907 and then gave up law school, never finishing his degree.

He was elected to New York’s state senate in 1910, and then served as Assistant Secretary of the Navy from 1913-1920. In 1920 he was the vice-presidential candidate on the Democratic ticket with James Cox, who was handily defeated by Republican Warren G. Harding.

In 1921, while vacationing at the family estate in Campobello Island, Maine, Roosevelt was struck by polio. He was 39. Roosevelt was in a wheelchair for the rest of his life, although he could stand with leg braces. He was able, with the help of friendly reporters and fellow politicians, to downplay or simply hide the extent of his disability from the public for most of his career.

Roosevelt was elected governor of New York in 1928 and then again in 1930. That gave him the recognition to become the Democratic candidate for president in 1932. He defeated incumbent President Herbert Hoover, and took over leadership of a country that was mired in the early years of the Great Depression. Early on, he began a series of friendly radio addresses to the nation which became known as his “fireside chats.”

FDR attacked the Depression with a package of federally-supported public works and social programs (including Social Security) that became known collectively as the New Deal. This form of ambitious government spending was popular with the average Americans who were lifted out of poverty, but not with the wealthy; “Hissing Roosevelt” became a favorite pastime of the rich.

It didn’t matter: Roosevelt was popular with enough Americans that he was elected four times: in 1932, 1936, 1940, and 1944. His lengthy run broke the unofficial two-term limit started by George Washington, and it later led to the passage of the 22nd Amendment, restricting presidents to two terms.

When America entered World War II in 1941, Roosevelt formed a close partnership with British PM Winston Churchill (and a not-so-close partnership with the USSR’s Joseph Stalin) that helped turn the tide and win the war. FDR died in office in 1945, only a few months into his fourth term and just a few months before the end of the war. His successor was his vice president, Harry Truman.

Franklin Roosevelt’s Scottish Terrier, Fala, was a popular White House figure from 1940 until FDR’s death. Per the FDR Library, “FDR named him after a Scottish ancestor, the ‘outlaw’ John Murray of Falahill. This was soon shortened to Fala and like his outlaw namesake his legend grew.” Fala is buried near FDR at Hyde Park, New York… Franklin Roosevelt was 6’3″ tall in 1921, when he was struck by polio… FDR was the 32nd president.

Something in Common with Franklin D. Roosevelt