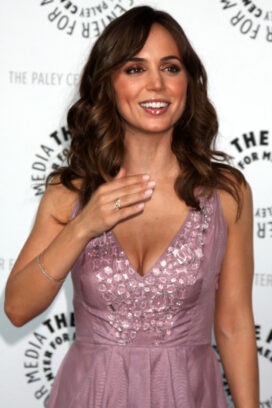 Her biography, filmography and more

2018 report from The New York Times

2018 story about her frightening revelation

Eliza Dushku's Love Letter to Her Country and Culture

Actress Eliza Dushku is best known for her recurring role as Faith in the Joss Whedon television series Buffy the Vampire Slayer and Angel, as well as her appearances in more than two dozen films.

Eliza Dushku began her acting career when she was a child, and she made her feature film debut in 1992’s That Night. She then appeared in This Boy’s Life (1993, with Leonardo DiCaprio) and True Lies (1994, with Arnold Schwarzenegger).

Dushku then took time off to finish high school, and in 1998 joined the cast of Buffy (starring Sarah Michelle Gellar), appearing in several episodes as bad girl Faith. She then appeared in Angel (the Buffy spin-off series), and the feature films Bring It On (2000, starring Kirsten Dunst) and City by the Sea (2002, starring Robert DeNiro).

She stayed busy in television: From 2003-2005 she starred in the sci-fi drama Tru Calling as a morgue worker with the ability to re-live the past, and from 2009-10 she starred in Dollhouse, another project from Joss Whedon.

Her other films include The Scribbler (2014), the indie rom-com Jane Wants a Boyfriend (2015) and the psychological thriller Eloise (2017). She has also done animation voiceover work, most notably as the Catwoman in the film Batman: Year One (2011). She also created a 2016 documentary, Dear Albania, tracing her family’s Albanian roots.

In December of 2018, The New York Times reported that Eliza Dushku had accepted a $9.5 million settlement from CBS to settle a claim of sexual harassment after she was written off of the network’s primetime drama Bull in 2017.

In January of 2018, Eliza Dushku published on her Facebook page an allegation that she had been sexually molested by Joel Kramer, stunt coordinator during the filming of the movie True Lies. She was 12 at the time of the incident. (This was unrelated to her 2018 settlement with CBS.) Kramer denied that the incident had taken place.

Something in Common with Eliza Dushku