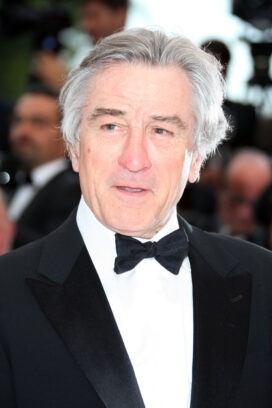 The most celebrated American film actor of his era, Robert De Niro won his first Oscar as best supporting actor for The Godfather, Part II in 1974.

Over the next few decades, De Niro became known for his intense portrayals of mobsters, tough guys, loners and other not-quite-socially-adjusted characters, and equally well known for his single-minded commitment to acting.

The latter reputation was sealed when De Niro packed on 50 pounds to play boxer Jake LaMotta in Martin Scorsese‘s 1980 film Raging Bull, for which he won an Oscar as best actor.

Not lacking whimsy, De Niro has also played character roles of all sorts, including an offbeat ex-con in Jackie Brown and a comical fantasy pirate in Stardust (2007).

Robert De Niro played young Vito Corleone in The Godfather, Part II; an older version of Corleone was played by Marlon Brando in The Godfather (1972). Brando also won an Oscar, as best actor, for the role…. Robert De Niro founded the TriBeCa Film Center in Manhattan in 1989, and created the TriBeCa film festival in 2002 as a response to the 2001 attacks on the World Trade Center.

Something in Common with Robert De Niro