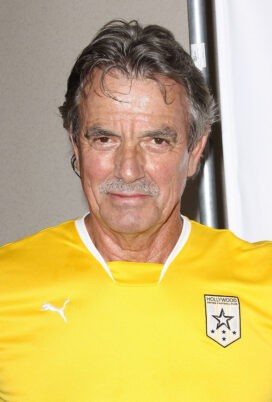 German-born actor Eric Braeden has played urbane tycoon Victor Newman on the daytime drama The Young and the Restless since 1980. As Hans Gudegast, he began his career in the 1960s playing Nazi soldiers on TV, most memorably in The Rat Patrol (1966-68). He changed his name to the more American-sounding Eric Braeden when he landed the role of Dr. Charles Forbin in the computer-gone-nuts classic Colossus: The Forbin Project (1970). Throughout the 1970s he continued to play mostly German bad guys on American television; he became a familiar face to viewers thanks to appearances in shows from Gunsmoke and Marcus Welby, M.D. to The F.B.I. and Wonder Woman. He joined the cast of the soap opera Y&R in 1980.

Braeden played another tycoon, John Jacob Astor, in James Cameron‘s film Titanic (1997, starring Leonardo DiCaprio)… He attended Montana State University (now University of Montana) on a partial athletic scholarship for track and field… Braeden has been nominated for a Daytime Emmy several times and won in 1998.

Something in Common with Eric Braeden