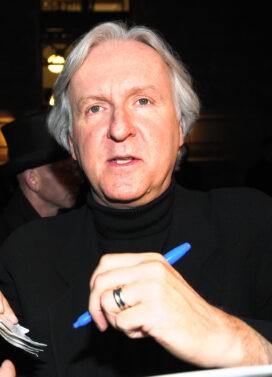 A self-made giant of Hollywood, Canadian James Cameron went from set-builder to art director (for 1981’s Escape From New York) to writer and then director of some of the biggest films of his era, including Titanic and Avatar.

Cameron broke out when he directed Arnold Schwarzenegger in his career-making role in The Terminator (1984).

Cameron then directed Sigourney Weaver in the box office hit Aliens (1986) and Ed Harris in The Abyss (1989). He followed with the smashing success of the sequel Terminator 2: Judgment Day (1991).

After the success of Titanic Cameron worked on a variety of non-feature projects, including the TV series Dark Angel (2000-02, starring Jessica Alba) and documentaries based on his love of diving and the ocean, including Ghosts of the Abyss (2003) and Aliens of the Deep (2005).

After 12 years away from feature films, he made a spectacular return in 2009 with the effects-heavy film Avatar. The sci-fi epic was nominated for an Oscar as best film (eventually losing out to The Hurt Locker), and in only its second month of release surpassed Titanic as the highest-grossing movie of all time.

Cameron was married to actress Linda Hamilton, the star of his movies The Terminator and Terminator 2, from 1997-1999… He has also been married to Sharon Williams (1978-84), the producer Gale Anne Hurd (1985-89), the director Kathryn Bigelow (1989-91), and the actress Suzy Amis (2000-)… Bigelow directed the 2009 film The Hurt Locker, which beat Avatar for the Oscar as the year’s best picture. Bigelow and Cameron were both nominated as best director as well, and Bigelow won the Oscar there, too… The love theme from Titanic, “My Heart Will Go On,” was a huge hit for Celine Dion.

Something in Common with James Cameron