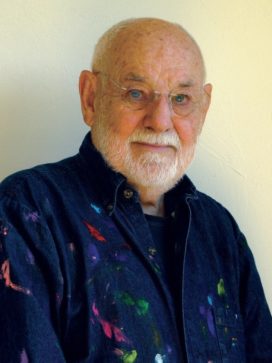 Eric Carle wrote and illustrated dozens of books for young children, the most famous being 1969’s The Very Hungry Caterpillar.

Born in New York but raised in Germany, Carle returned to the United States in 1952 and began working in graphics arts, first for the New York Times and then at a New York advertising agency.

The first book he illustrated, written by Bill Martin, Jr., was Brown Bear, Brown Bear, What Do You See? (1967).

His distinctive collage-illustration made his books instantly recognizable, and he won numerous awards throughout his career.

The Very Hungry Caterpillar is said to be one of President George W. Bush‘s favorite books.

Something in Common with Eric Carle