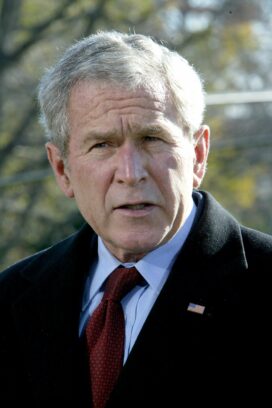 George W. Bush is the son of former U.S. president George Bush, who served from 1989-93. (The terms of father and son were separated by the two terms of Bill Clinton.) George W. Bush graduated from Yale in 1968. After serving as a pilot in the Texas National Guard, he attended Harvard Business School and then worked in the oil and gas industries until 1986, when he got involved in his father’s successful 1988 presidential campaign.

He returned to Texas and was elected governor there in 1994 and again in 1998. Bush won the Republican nomination for president in August of 2000, choosing Dick Cheney as his running mate. In the November general election they ran against Democratic candidate Al Gore and Joseph Lieberman.

The 2000 election is now remembered for the extremely close and controversial vote in Florida; after a post-election delay of a month while votes were recounted and lawsuits were filed on both sides, Gore conceded the election to Bush on December 13, 2000. Bush led in electoral votes 271 to 267, while receiving fewer popular votes nationwide than Gore: the final official tally was 50,158,094 votes for Gore to 49,820,518 votes for Bush.

Bush and Cheney won re-election in 2004 against a Democratic ticket of John Kerry and John Edwards. Bush’s public approval ratings plummeted during his second term, thanks to the ongoing war in Iraq, his administration’s sluggish response to Hurricane Katrina in 2005, and an economic crash in 2008. Bush was succeeded on January 20, 2009 by a Democratic president, Barack Obama.

George W. Bush married his wife Laura Bush (formerly Laura Welch) in 1977; they have twin daughters, Jenna and Barbara, born in 1981… In the fall of 2000, Barbara entered Yale, Jenna the University of Texas at Austin; both graduated from their respective schools in 2004… George W. Bush has an undergraduate degree from Yale (1968) and an MBA from Harvard (1975)… In November 2000, days before the presidential election, George W. Bush admitted that in 1976 he was arrested for drunk driving in Maine, an arrest he had previously hidden… He has said that he stopped drinking alcohol entirely in 1986… George W. Bush is the fourth man to win the presidency while losing the popular vote. Donald Trump became the fifth in 2016… George W. Bush fainted briefly on January 13, 2002 after a pretzel reportedly got stuck in his throat while he was watching football on TV; Bush recovered moments later and the incident was not considered serious.

Something in Common with George W. Bush