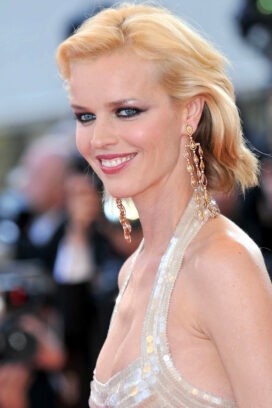 Model Eva Herzigova followed Claudia Schiffer as the lead model for Guess Jeans in the early 1990s and remained a steady presence in the world of modeling for the next two decades. A thin blonde with sharp blue eyes, Herzigova made her biggest splash with a famous series of va-va-voom Wonderbra ads in the 1990s, appearing in lingerie photos with tag lines like “Hello boys” and “Look me in the eyes.” Eva Herzigova also was featured in the Sports Illustrated swimsuit issue and the Victoria’s Secret lingerie catalog, and her career has continued right into the 21st century, with Herzigova walking catwalks for high-end houses like Louis Vuitton and Hermés and showing up on magazine covers around the world. Eva Herzigova has acted in a few films, including Guardian Angels (1998) and Just For the Time Being (2000). She played Pablo Picasso‘s first wife, Olga, in the 2004 film Modigliani.

Eva Herzigova has two sons with her longtime companion, Gregorio Marsiaj: Gregory (born 2007) and Philip (b. 2011)… Eva Herzigova married Bon Jovi drummer Tico Torres in 1996; they divorced in 1998… Eva Herzigova speaks “fluent Czech, English, French, Italian and Spanish,” according to a 29 May 2008 article on Vogue.com.

Something in Common with Eva Herzigova