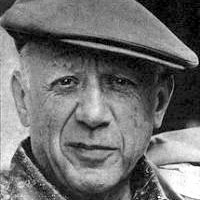 Pablo Picasso is one of the most famous painters of the 20th century, and perhaps the leading figure of that era’s daring modern art movement.

Pablo Ruiz y Picasso showed artistic ability at an early age, and when he began to study art seriously in Barcelona and Madrid, he was already a skilled painter. In the early 1900s he visited and eventually settled in Paris, where he was part of a vibrant artistic community that included Gertrude Stein.

Although greatly influenced by other artists in Europe and beyond, most notably Henri Matisse, Picasso was inventive and prolific and earned a worldwide reputation as an innovator. His enormous body of work spans so many years that art experts generally separate his career into distinct phases, such as the Blue Period, the Rose Period and his most famous contribution to modern art, Cubism. P

Pablo Picasso painted almost until his death at age 91 in 1973. By then he was an international celebrity, as famous for his intensity and irreverence as for his vital contributions to the world of art.

Pablo Picasso was played by Anthony Hopkins in the 1996 film Surviving Picasso and by Antonio Banderas in the 2018 cable TV miniseries Genius: Picasso.

Something in Common with Pablo Picasso