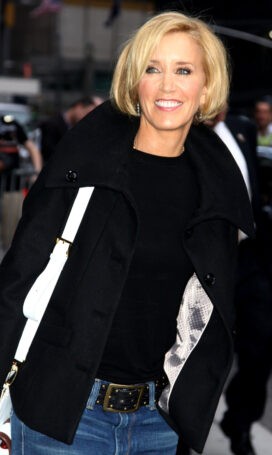 After more than two decades on stage and screen, Felicity Huffman became a household name in 2004, thanks to her Emmy-winning performance as Lynette on TV’s Desperate Housewives.

Felicity Huffman studied theater in London and New York and began acting professionally in the late 1970s. After many television movies and guest spots, she landed a central role in the critically acclaimed series Sports Night (1998-2000). More TV and film roles followed, and Huffman proved herself capable of doing both comedy and drama.

Married to actor William H. Macy since 1997, she has also stayed active in live theater, collaborating with her husband and writer David Mamet in productions such as Broadway’s Speed-the-Plow (1988). Her films include Reversal of Fortune (1990, starring Jeremy Irons), Magnolia (1999, starring Tom Cruise), Raising Helen (2004, with Abigail Breslin), Transamerica (2005), Georgia Rule (2007, with Jane Fonda and Lindsay Lohan), Rudderless (2014, directed by Macy) and Stealing Cars (2015).

Felicity Huffman and Macy have two daughters. On March 12, 2019, Huffman was one of dozens of Americans arrested and charged in a college entrance exam cheating scandal. The U.S. Attorney’s Office said that Huffman and Macy gave $15,000 to the Key Worldwide Foundation to have an imposter take SAT tests for one of their daughters. Huffman was charged with conspiracy to commit mail fraud, and then released on $250,000 bail.

Something in Common with Felicity Huffman