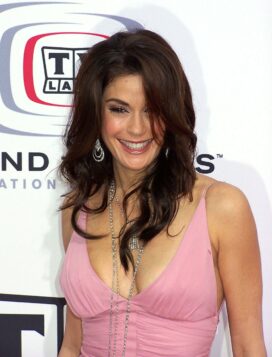 Teri Hatcher jumped into acting after a brief stint as a cheerleader for the NFL’s San Francisco 49ers. After several small roles, she was cast in 1993 for the television series Lois & Clark: The New Adventures of Superman. The show was a hit, and Hatcher’s success on TV was matched by her success on the Internet: in the early days of the World Wide Web, Hatcher was unofficially "the most downloaded woman in the world." After Lois & Clark Hatcher moved into feature films, including the James Bond flick Tomorrow Never Dies (1997, with Pierce Brosnan as Bond) and Spy Kids (2001). In 2004 she landed a role on another hit series, the jokey, soapy drama Desperate Housewives — playing, as her show bio put it, “a single mom searching for love amid the sometimes sordid, always intriguing goings-on of her suburban neighborhood.”

Hatcher’s TV debut was as a ‘Love Boat Mermaid’ on the TV series The Love Boat… She is also known for her long-running series of Radio Shack TV commercials with former NFL star Howie Long… Felicity Huffman and Eva Longoria co-star with Hatcher many on Desperate Housewives .

Something in Common with Teri Hatcher