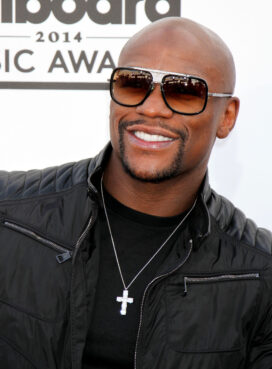 Floyd Mayweather, Jr. is the superstar boxer who used mettle and defensive prowess to go undefeated in 48 pro fights from 1996-2015.

Boxing runs in Mayweather’s family: his father, Floyd Mayweather, Sr., had 35 pro fights as a welterweight.

But Mayweather Sr. also served time in prison for selling cocaine, and Mayweather Jr. had a rough childhood in Michigan before dropping out of high school to focus on boxing. He was 19 when he won a bronze medal as a featherweight in the 1996 Olympics.

He turned pro after the Olympics, knocking out Roberto Apodaca in his first pro fight on 11 October 1996.

From there, Mayweather went undefeated for over 18 straight years, going 47-0 as he gradually rose through weight classes from super featherweight through light middleweight. Along the way he became known as a savvy technician and strategist who wore out rather than knocked out his opponents.

He also earned the nickname “Money,” a tribute both to his reliable earning power and his extravagant lifestyle. (USA Today reported in 2015 that Mayweather had bought 100 cars, including 16 Rolls Royces, from one Las Vegas dealership in 18 years.)

By 2012 he was one of boxing’s biggest draws; that year he earned $85 million and replaced Tiger Woods at the top of Forbes magazine’s list of the world’s best-paid athletes.

In 2015 he agreed to fight Manny Pacquiao in a long-anticipated match that was called, naturally, the Fight of the Century. Mayweather won by unanimous decision, running his record to 48-0 and earning more than $150 million for that one fight alone.

Floyd Mayweather, Jr. is 5’8″ tall… Mayweather spent three months in jail in 2012 after pleading guilty to committing misdemeanor domestic battery against a former girlfriend, Josie Harris, in 2010. Harris is the mother of three of Mayweather’s children. He has also been convicted of domestic violence (in 2002) and also of misdemeanor battery (in 2004) after a fight with two women in a nightclub, and pled no contest to a misdemeanor battery charge (in 2005) after slugging a bouncer in 2005… Floyd Mayweather has never been married but has four children by two women: sons Koraun (born circa 2000) and Zion (born c. 2001) and daughters Iyanna (born c. 2001) and Jirah (born c. 2004). An April 2010 report in The New York Times gave the children’s ages as Koraun, 10, Iyanna, 9, Zion, 9, and Jirah, 6… Mayweather retired from boxing in 2007 but then returned to the ring in 2009… He appeared on Dancing With the Stars in 2007; he was paired with Karina Smirnoff and finished ninth… He has his own fashion brand, TMT, which stands for The Money Team, and also uses the acronym TBE for The Best Ever. In years past he was also known as Pretty Boy Floyd.

Something in Common with Floyd Mayweather