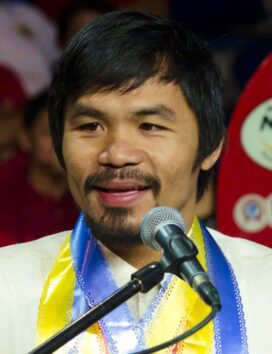 Manny Pacquiao is 41 years old
Born: December 17, 1978
Birthplace: Kibawe, Bukidnon, The Philippines
Best known as: The boxing superstar who became a member of the Philippine Congress.

The Biggest Little Man in the World

All about the Manny, mainly selling boxing gloves and other memorabilia

All Manny, all the time at this Filipino fan site

Known as “Pac Man” to his many fans, Manny Pacquiao is the world champion boxer, entertainer and politician who is a major public hero in his native Philippines.

Born to a poor family, Manny Pacquiao left home at age 14 and moved to Manila, where he slept on the streets at times before taking up boxing. He had found his calling: he was soon a member of the Philippine national amateur team and at age 16 he turned pro as a light flyweight (108 pounds).

Smiling and charismatic, yet a fast and relentless puncher, Pacquiao was often called the best “pound for pound” fighter in the world. His punishing win over Oscar De La Hoya in 2008 pushed him over the top into global stardom, and the Boxing Writers Association of America named him the Fighter of the Decade for the years 2000-09.

In the Philippines he grew into a one-of-a-kind icon, with his own TV shows (starring in the sitcom Show Me the Manny and hosting the game show Manny Many Prizes), music albums (including Laban Nating Lahat Ito in 2006) and endless commercial endorsements; by 2014, Forbes had him at #11 on the list of the world’s highest-paid athletes with earnings of $41.8 million. He also ran successfully for the Philippine House of Representatives, taking office on June 28, 2010 and winning reelection in 2013.

After years of negotiations, Pacquiao and superstar boxer Floyd Mayweather agreed to fight on May 2, 2015 in what instantly became of the most-anticipated bouts of the 21st century. The fight went the full 12 rounds and Pacquiao lost to Mayweather by unanimous decision, but Pacquiao still earned 40% of a purse estimated to be over $300 million.

Despite regular talk of retirement, Pacquaio continued to fight on. He was 40 years old in 2019 when he defeated the previously unbeaten Keith Thurman in a split decision to win the WBA super welterweight title.

Manny Pacquiao’s name is pronounced “PAK-ee-ow”… He is 5’6’ tall… Pacquiao: The Movie, a 2006 drama based on Pacquiao’s life, starred Jericho Rosales as Pacquiao… Manny Pacquiao married the former Maria Jamora on May 10, 2000. She is known as Jinkee. They have five children: Emmanuel Jr., Michael, Mary, Queen Elizabeth and Israel… His nickname in the Philippines is Pambansang Kamao — the ”National Fist”… Pacquiao represents the lone district of Sarangani in the Philippine Congress,.. Manny Pacquiao has won world championships in at least six weight classes and as many as eight, depending on which boxing organizations are counted as legitimate worldwide contenders.

Something in Common with Manny Pacquiao