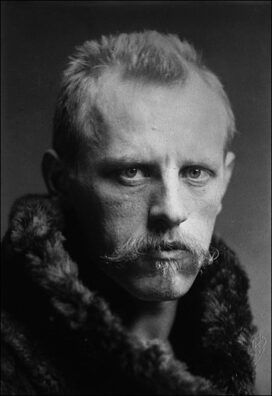 Fridtjof Nansen was a polar explorer and statesman whose achievements made him a Norwegian hero at the turn of the 20th century. A student of zoology, Nansen’s first polar experience was in 1882, aboard the Viking as it explored Greenland. An expert skier, Nansen gained fame throughout Norway after his bold ski crossing of Greenland in 1888. Nansen had traveled east to west on the trip, abandoning any chance of a return trip, should he fail. He didn’t fail, and that allowed him to secure the backing to launch his new ship, Fram (“Forward”), in an attempt to reach the North Pole in 1893. Nansen’s plan was radical: he aimed to over-winter in the ice, waiting months for a current that would carry his ship to the Pole. When the ship didn’t get close enough, he set out with a companion on sleds, setting a record in March of 1895 as the explorer who’d gone further north than anyone. In something of a miracle, Nansen was rescued and he returned to Norway as an international celebrity. He was an enormous influence on the next generation of polar explorers, especially Roald Amundsen, and he used his status to help Norway achieve independence from Sweden (1905). Nansen served in London as Norway’s first ambassador (1906-08), was a professor of oceanography and zoology and, in his later years, was awarded a Nobel Peace Prize (1922) for his work in helping refugees after World War I.

According to a 1979 biography of Roald Amundsen by author Roland Huntford, Fridtjof Nansen had a brief love affair with the wife of Robert Falcon Scott, while Scott was freezing to death on the continent of Antarctica.

Something in Common with Fridtjof Nansen