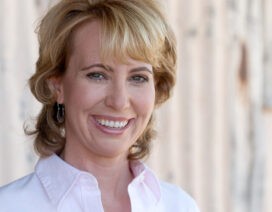 Gabrielle Giffords is the Arizona Congresswoman who was shot in the head by an attacker in Tucson on 8 January 2011. She survived the shooting, though six others around her were killed. Gabrielle Giffords was raised in Tucson and graduated from Scripps College in California in 1993, then earned a Master of Regional Planning degree (M.R.P.) from Cornell University in 1996. Moving back to Arizona, she ran the family business, El Campo Tire Warehouses, and then was a member of the state House of Representatives from 2001-03 and of the state Senate from 2003-05. She was elected as a U.S. Representative from Arizona’s 8th District in 2006, then reelected in 2008 and 2010. A Democrat, she “worked on issues such as immigration reform, embryonic stem-cell research, alternative energy sources and a higher minimum wage,” according to a 2011 report by Reuters. She was shot by a 22-year-old man named Jared Loughner while at an outdoor meet-and-greet with constituents in Tucson on 8 January 2011. Giffords was shot once through the head and critically wounded, but was rushed to the hospital and survived surgery. On 21 January 2011 she was moved to a clinic in Houston, Texas, where she spent the next several months in rehabilitation. Though still not back to full speed, she returned to Congress in August of 2011 to cast a vote on the debt ceiling.  She resigned her seat on 25 January 2012, saying that she would focus on recovering from the shooting.

Gabrielle Giffords is nicknamed Gabby… Some news outlets at first reported that Gabrielle Giffords had been killed, but later in the day trauma surgeon Peter Rhee announced that she had survived… Gabrielle Giffords married astronaut Mark E. Kelly in 2007. Kelly has been a pilot on two shuttle missions (in 2001 and 2006) and commander of two more (in 2008 and 2011). Kelly has two children from a previous marriage; this is Giffords’s first marriage and she has never had children herself… According to a 2011 report in the Arizona Daily Star, Gabrielle Giffords is “the third woman in Arizona history elected to Congress and the first female Jewish member of Congress from Arizona”… Among the six bystanders killed in the 2011 shooting was federal judge John Roll… Her shooter, Jared Loughner, was convicted and sentenced to life in prison.

Something in Common with Gabrielle Giffords