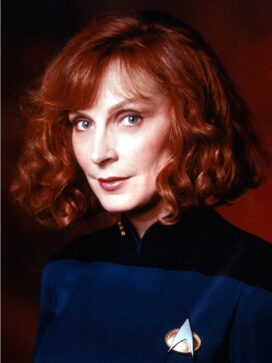 McFadden’s mix of cool professionalism and mature sex appeal earned her a devoted crowd of fans. (Many fans particularly loved the idea of her would-be romance with Captain Jean-Luc Picard, played by Patrick Stewart.)

A 1970 graduate of Brandeis University, Gates McFadden came to show business by way of dance and theater.

McFadden began working with puppets in the late 1970s, and she was a choreographer on the Jim Henson movies The Dark Crystal (1982) and Labyrinth (1986).

McFadden’s other appearances include The Hunt for Red October in 1990 (she was Caroline Ryan, hero Jack Ryan’s wife), Dirty (2005) and Make the Yuletide Gay (2009).

Gates McFadden had a regular role on the TV soap opera All My Children in 1988… Other Star Trek stars include Nana Visitor, Scott Bakula and William Shatner.

Something in Common with Gates McFadden