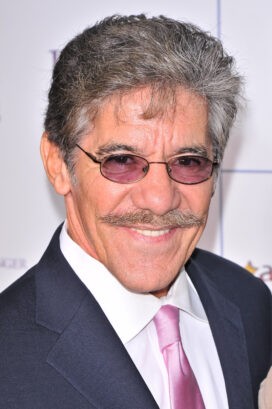 Talk show host and investigative reporter Geraldo Rivera has been a steady presence on television since the early 1970s, sometimes breaking and sometimes making the news. He started out in 1970 at WABC-TV in New York, and within a few years had a national reputation for his investigative reporting and his hip, “youth-oriented” looks. (His bristly mustache became a Geraldo signature.) During the 1980s Rivera did reports for ABC News, including highly-rated shows for 20/20 on Elvis Presley‘s drug abuse and Al Capone‘s vault. In 1987 he started Geraldo, a syndicated talk show that ran for eleven years and became known for hot-button topics and hot-headed guests. Geraldo made the news himself in 1988 when his nose was broken in a brawl that erupted during the taping of a show about white supremacists. In 1994 Rivera started Rivera Live on CNBC, a show on legal issues that got a jumpstart from the lengthy trial of O. J. Simpson. In 1997 Rivera signed a six-year, $30 million contract with NBC, but left in 2001 to join the Fox News Channel as a war reporter in Afghanistan. Although frequently lampooned and criticized for tabloid-style journalism, Rivera is also widely admired and has won several awards, including multiple Emmys.

Something in Common with Geraldo Rivera