A joke — how can you tell when Geraldo Rivera is saying something stupid? His lips are moving. Oh, and he put it on Twitter.

His remarks about the shooting death of Tayvon Martin caused a hubbub. Because Rivera said Martin wouldn’t have been shot to death if he hadn’t been wearing a hooded sweatshirt (a hoodie). 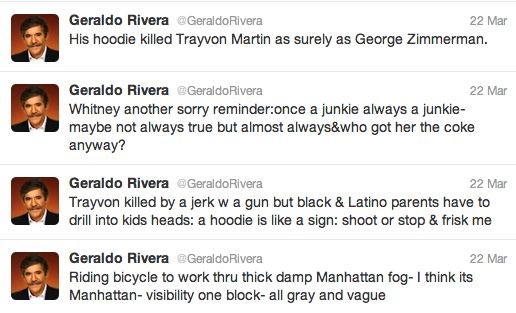 Geraldo Rivera has since apologized, in the unapologetic way we all recognize. It’s a handy talent that allows you to say, for example, “when I said you were stupid and ugly, I didn’t mean to offend you.” 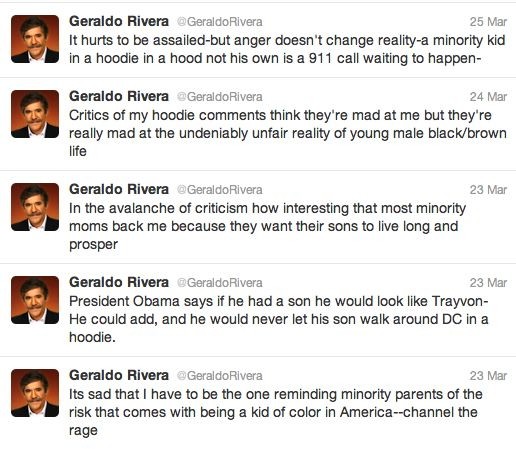 Geraldo could have said, “We need to educate people that just because someone has dark skin and is wearing a hoodie doesn’t mean he’s a threat.” Instead he blamed the victim for not being smart enough to avoid a scared man with a gun.

Geraldo’s probably happy to get the attention. Despite his son being “ashamed” of him, Geraldo’s enjoying headlines for the first time in a while, and his hoodie comments will no doubt make the highlight reel of his career.

A highlight reel that would include his stunt on live television with Al Capone‘s vault:

It turns out there was nothing in there.

Another highlight of Geraldo’s career is when he got popped in the schnoz by a chair on his own TV show:

Geraldo made us realize just how good Jerry Springer is at this sort of thing.

He used to be a young maverick in television journal, but now Geraldo sounds like an old man. Surely he was told during his career, “If you wear a sport coat without a tie, nobody will take you seriously.” Even more to the point, Geraldo Rivera must have been told dozens of times “you’ve got to lose the mustache. It makes you look gay, or like a cop, or like a gay cop, or like a cop who beats up gays because he doesn’t want to admit that he is gay himself.”

Did Geraldo realize that his mustache gives the impression that he is more court jester than serious journalist? Apparently not.

I’ll leave you with this last delightful bit of Geraldo Rivera on Twitter: