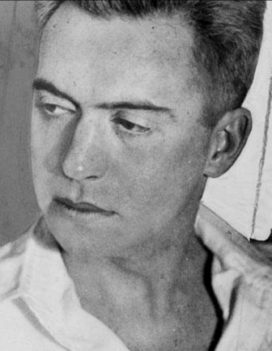 Bright, volatile, short-lived and hard-drinking, Hart Crane was in some ways an archetype of the Roaring Twenties author.

Crane is best known for The Bridge (1930), an epic vision of American life with the Brooklyn Bridge as a central image.

From a well-off family, Crane lived in Ohio and New York, and wrote much of his ambitious, book-length poem off the coast of Cuba.

Crane is often compared to Walt Whitman, one of his obvious influences, both for his modern American sensibilities and for the homoerotic imagery found in his work.

In sheer style Crane also resembled T.S. Eliot, whom he admired, but whose “negative” view of the 20th century he aimed to oppose with a robust image of the spirit of America.

Crane committed suicide by leaping from the S.S. Orizaba in 1932, on a return trip from Mexico.

Hart Crane was no relation to Stephen Crane, author of The Red Badge of Courage… Actor James Franco wrote, directed and starred in a movie about Crane, 2012’s The Broken Tower (co-starring Michael Shannon as Crane’s love interest). The film was Franco’s Master’s degree thesis.

Something in Common with Hart Crane