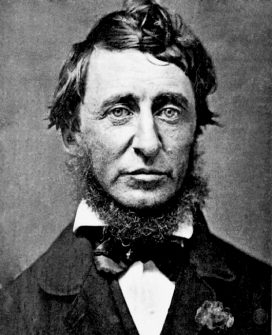 Henry David Thoreau was a 19th century American writer, best known for his back-to-nature journals and poems, including Walden, or a Life in the Woods.

A former schoolteacher, Henry David Thoreau spent two years in the 1840s living in a one-room hut beside Walden Pond in Massachusetts, where he studied nature and wrote peaceful essays and poems. His journal of these years became his most famous work: Walden, or a Life in the Woods (published 1854).

Thoreau was christened David Henry Thoreau, but switched to calling himself Henry David after graduating from Harvard… He was a lifelong bachelor… His single-room cabin at Walden Pond was 10 feet wide by 15 feet long… Thoreau spent two days and a night in jail — July 23 and 24, 1846 — after he refused to pay his poll tax as an act of civil disobedience… Among his sayings was, “Beware of enterprises that require new clothes.”

Something in Common with Henry David Thoreau